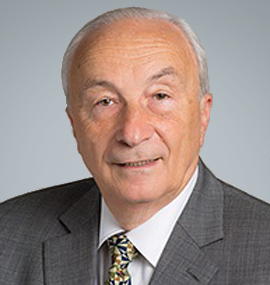 Myron Greenspan is a member of the patent department and has extensive experience in patent prosecution and enforcement. He has counseled clients in connection with numerous areas of IP including patents, patent validity, opinions, enforcement and infringement issues and related international patent IP portfolio management.

Mr. Greenspan was raised in Paris, France and reads technical French and German. After graduating with a Bachelor's Degree in Electronic Engineering, Mr. Greenspan joined the Applied Electronics Department of Airborne Instruments Laboratory, where he designed and developed a wide range of components and systems in the fields of aerospace and communications. During this period he began further studies in electronics towards a Masters Degree in Electronic Engineering. Mr. Greenspan authored a number of technical articles, including, “Shielding Effects in Thin-Film Integrated Circuits,” published in the IEEE Transactions On Electromagnetic Compatibility.

Mr. Greenspan graduated Brooklyn Law School with a J.D. degree. He attended New York University in the Graduate Law Studies Division, earned a Masters of Law Degree (L.L.M.) in Trade Regulations with a concentration in Intellectual Property. Mr. Greenspan is the author of a number of articles relating to Intellectual Property, including “Preserving Rights in Recorded Works” published in the Patent Law Review, Clark Boardman Company, Ltd. and “Patent Trademark and Copyright Considerations in the Toy Industry,” published in Hobbies Toys & Crafts.

After graduation, Mr. Greenspan joined a pharmaceutical company where he set up an in-house IP Department. Mr. Greenspan also served as an associate professor at the Graduate Engineering Center of the Polytechnic Institute of Brooklyn where he taught an “Intellectual Property for Engineers” course to engineering and science graduate students. He has continued to lecture at CCNY on contemporary topics in IP to engineering and science students and faculty. Mr. Greenspan has lectured extensively on topics of Intellectual Property, including on the Role of Intellectual Property in a Free Market Economy; and has been a lecturer and panelist in St. Petersburg and Moscow in Russia before the Russian Academy of Sciences and at the Kazakhstan Patent Office in Alma-Ata while that Office was being established after the Russian Republics separated from Russia upon the termination of the Soviet Union.

Mr. Greenspan has litigated and argued patent, trademark and copyright cases before the Court of Appeals for the Federal Circuit, USPTO Board of Appeals, Federal District Courts in Florida, Minnesota, California, Connecticut, Rhode Island, New Jersey, Pennsylvania, and Illinois and has litigated patent and trademark causes in the U.K. and France. He has regularly served as a trial judge at Yale Mock Trial Invitationals.