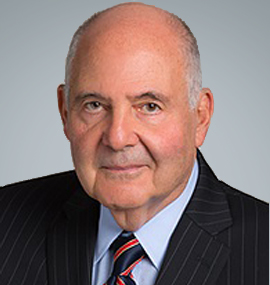 Marvin Feldman provides his extensive knowledge and experience based upon decades of domestic and international intellectual property representation to clients in a broad range of businesses and technologies to secure and commercialize patents in areas as diverse as the biomedical, pharmacological, information technology and the mechanical arts. Based on such acknowledged legal prowess, he has lectured extensively on the subject of patents in various forums.

Notably, after the Peoples’ Republic of China enacted patent laws and adopted international legal norms, the government of China, through its State Science and Technology Commission and as part of the China Business Technology Program, invited Mr. Feldman to travel the country and lecture on patent principles and practice. Seminars were set up in technology centers in Beijing, Nanjing, Shanghai, Qingdao and Xian, and with leading businesses throughout China. Mr. Feldman was the first foreign recipient of the Torch Award granted by the China State Science and Technology Center. Domestically, he has an impressive resume of intellectual property presentations, including providing a comprehensive patent practice seminar at Ramapo College, and was selected to judge the Masters of Business Administration venture capital course projects at Long Island University.

Mr. Feldman’s broad range of clients have included Pfizer, the Albert Einstein College of Medicine, Union Carbide, Witco Chemical, GAF, Yale University, Drug Delivery Systems, Labratorios Biologicos Farmaceuticos, the biomedical laboratories and research facilities of Cuba, leading medical practitioners, Raritan Computers, and hand tool manufacturers including Channellock, Bestway, Dexter-Russell and Hyde. In addition to his patent expertise, he has represented in the US the Chinese owned licensee of TVB, the renowned Hong Kong television enterprise, with respect to the seizure of pirated television program tapes, and in connection with a suit against an infringer was a contributor to the US Appellate Court argument and wrote the appellate brief with respect to such intellectual property issues.

Prior to joining Nolte Lackenbach Siegel, he was a partner and headed the Patent Departments of two law firms in New York City specializing in intellectual property and commercial causes. That breadth of experience and diverse client relationships has put Mr. Feldman in demand as an expert on patent portfolio development and protection. Mr. Feldman holds a baccalaureate degree in Chemical Engineering from the City College of New York and a Juris Doctor degree from Brooklyn Law School. He is authorized to practice in many US District Courts, as well as the Federal Circuit Courts in the Second, Fifth and the Federal Circuit Court of Appeals.

The firm relies heavily on his strong background in chemistry, pharmacological sciences and polymer developments, and many clients have utilized his background related to his undergraduate thesis related to the structure of polypetrafluoro-ephylene. He became a solid propellants design engineer for the U.S. Army, which background lead in time to his appointment as a Project Development Engineer at United Technologies for the development of the Titan III-C polymerized solid propellant rocket system. At the age of 24, he was tasked with the design of interim polymer conditioning units for the Titan III-C components. His first position as a patent attorney was with Union Carbide handling the patent application preparation and prosecution for the Silane/Polysiloxane and Polymer Container Groups. He left Union Carbide to enter private practice and after the Union Carbide Polymer Container Group was sold to a private company, Consupak, Mr. Feldman was retained as outside patent counsel.